BANGKOK, THAILAND — Our first day might have made us overconfident in our navigating skills, as we went into a labyrinthine part of town to see a puppet show.

The day started with another relaxed breakfast at our B&B: fresh orange juice, stir-fried chicken with vegetables and, for dessert, melon and pineapple. According to our host Karan, Thais typically have a big breakfast, which suited us since we were still a little intimidated by all of the food stands. They all look interesting, but how do you order, and how do you know what you ordered?

We spent the morning writing blog posts until it was time to leave for the Artist’s House, a 200-year-old wooden house on a canal that hosts art workshops and a puppet troupe. Karan wrote directions for the cab driver, and off we went.

The cabbie got us to our stop at the end of a bridge, but after crossing it, we kept going, not realizing we had to duck under and follow a wooden walkway along the canal. A man who was waiting to get a haircut and, amazingly, spoke English, asked the barber for directions on our behalf, and we turned around.

An elderly lady recognized us from our first pass and pointed in the right direction when she asked, “Ban Sinlapin?” We love how friendly and helpful Thai people are, even if we can only communicate through gestures and facial expressions. We have walked through some pretty seedy streets but always got smiles and never felt in danger.

We got to the daily puppet show just in time and joined an audience of German tourists and Thai families with children. There was a costumed dancer and a puppet that was a miniature of the dancer and operated by three puppeteers — one for the legs, one for the left wrist/arm and the head and the third for the right hand.

There was music and dialogue, and we wished we knew what the story was, but it involved the puppet jumping onto the dancer’s back and biting him. The puppet movements were very realistic — especially the delicate wrist movements — but the music was hard to hear because tour boats with loud outboard engines kept speeding through the canal.

After the performance, we walked through the small shop and looked at puppets, which included one of Michael Jackson, then ordered iced cappuccino and cocoa. We drank them while watching canal traffic and talking to a young Thai tour guide who spoke good German, but even better Swiss German, mastered when he worked at the Zurich airport. It was disorienting to see this Thai dude seamlessly slip into a thick, low-German accent that even Torsten has trouble understanding.

Afterwards, we window-shopped at the small shops next to the Artist’s House and ended up at another beautiful temple. Unlike Wat Pho, its Buddhas were in all kinds of different postures, and the temple felt more ornately decorated but was deserted.

Thanks to Google maps, we dared to walk back a different way, through quiet canal neighborhoods, and we were struck by the contrasts along our route. Gated high-rise apartment buildings stood next to dilapidated shacks and trash-filled canals. Around one corner, we came upon a beautiful, gated mansion with a manicured yard. You never know what you’ll see on a walk through Bangkok.

Back on the main street, we hailed a cab and went back to our B&B and on to the evening market at the end of our street. It was a kind of flea market, with cheap toys and clothing plus lots of food stands. We took a spin through, then went for dinner at the Karan-recommended Princess Terrace on the Chao Phraya River.

It was still early, so along the way, we took an alley to a temple and on to a pier. It was closed for renovation, but there was a narrow riverside walkway that we followed, past playing kids and a litter of street puppies, until it was blocked by a gated apartment building.

We arrived at the Princess Terrace right before sunset and were surprised to see a large, modern two-level restaurant at the end of the ramshackle alley. We got a riverside table and settled in to enjoy cool breezes, cold drinks and the procession of river traffic — colorfully lighted dinner-cruise boats, barge convoys pulled by tiny tugboats and the wooden pagoda-like boats that ferry the guests of luxury hotels. 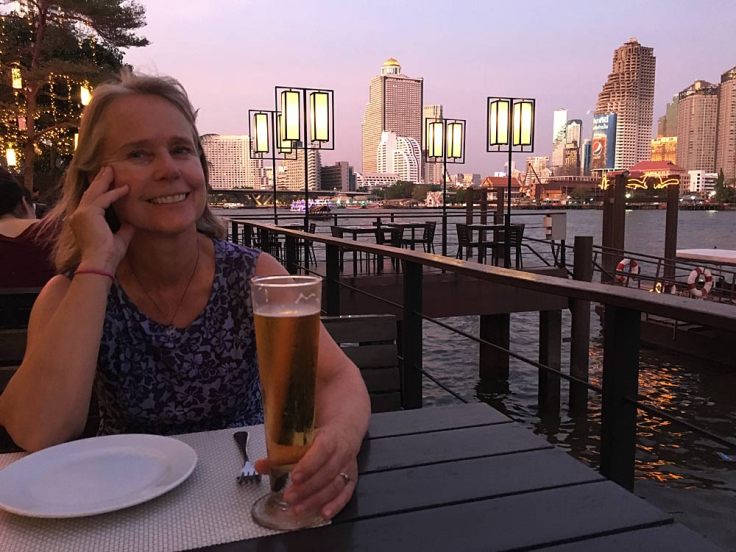 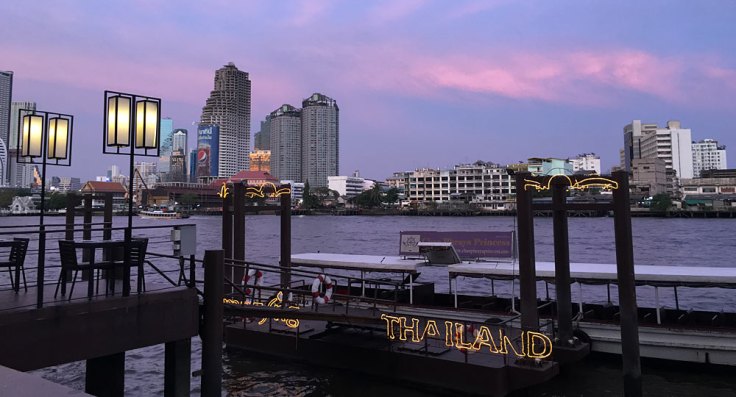 For dinner, we had fried glass noodles with seafood and a glass-noodle seafood salad. A three-woman band started playing a mix of English-language pop songs, and they were so good that we delayed our departure by ordering another round of passionfruit juice with sparkling soda, then chocolate cake, then mango sticky rice.

The other diners were ignoring the band, but finally Beth, with an encouraging nod from the head waiter, was able to get a round of applause going after each song, until they took a break.

It was a lovely evening — for us, Bangkok at its best.

One thought on “Masters of puppets”