Everyone knows what Munich’s Oktoberfest is about: oceans of beer, oompah music and buxom women in dirndls.

And it is. Since Torsten doesn’t like alcohol or crowds, especially when mixed, he knew he didn’t want to go. Beth wasn’t sure.

It turns out that Oktoberfest is an even bigger deal than we had thought. The grounds were on Torsten’s bicycle commute, and he watched in fascination as the “tents” – actually, frame buildings the size of an airplane hangar – started going up in June, like a pop-up city.

We heard horror stories about drunk people vomiting on overcrowded trains and wondered how a city of 1.5 million would cope with 6 million visitors. Beth advised her sister Lynn, who was planning a September hiking trip in Switzerland, to avoid visiting Munich during Oktoberfest.

Beth got two invitations to go to Oktoberfest.

It turned out be a charming, even wholesome 16 days. 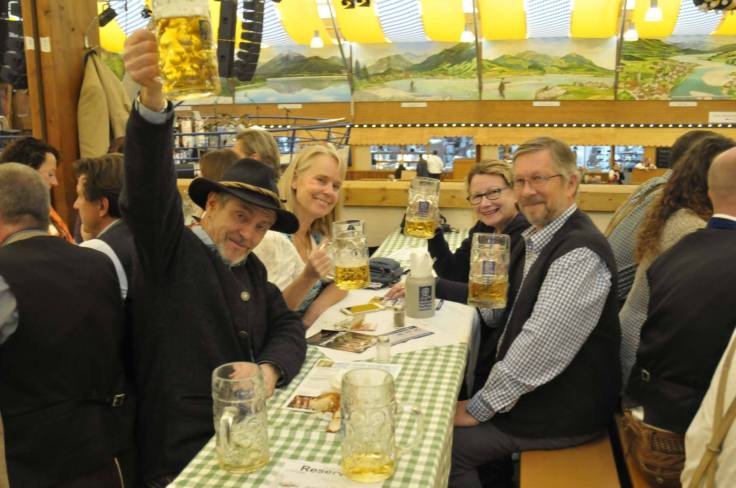 Not only are there two faces of Oktoberfest, daytime and nightime, but there are two different festivals within the gates: the one with the carnival rides and cavernous brewery tents and the Oide Wiesn, a nostalgic tribute to the festival of bygone years.

We started Oktoberfest by watching the costume parade on television. Beth had received a meetup group invite and thought it was just a bunch of ordinary people in dirndls and lederhosen walking to the festival.

It turned out to be more like the Rose Bowl Parade but a lot more interesting, with folk societies from Bavaria and beyond walking in Trachten, their regional costumes. Their history and traditions were coded into what they wore and carried, and commentators regularly pulled out representatives to explain what they were. Many of the groups were shooting clubs, with some members covered in so many medals it looked as if they were wearing chain-mail shirts.

Nearly everyone marching also played an instrument, which made this by far the liveliest and most colorful parade we’d ever seen. At the end, the action switched to inside the Schottenhamel tent, where Mayor Dieter Reiter tapped the first beer cask and started the festival.

Beth had planned to go with Lynn to the Herzkasperl tent in the Oide Wiesn, where she was invited to hear an Irish band by her cycling friend Wendy. But first she went with a Canadian artist from her German class, Rob, who in turn had been invited by a retired couple from Maryland, Bill and Julie, who had come to spend a year in Munich and were his neighbors.

Bill and Julie had reserved a table in the Fischer Vroni tent, and our party also included Peter, a German-born photographer who, crazily enough, had grown up in the same teeny tiny Minnesota town as Beth’s friend Jon. Small world!

We had a good time, and for the first time, Beth had Steckerlfisch – a whole fish impaled on a stick and grilled, a staple at beer gardens – and it was surprisingly moist and tasty.

Beth had bought herself a turquoise-and-black dirndl and white linen blouse at Vinty’s Secondhand Mode, and later she went back and got a black dirndl with gold embroidery for Lynn. She’d heard that, these days, everyone wears Bavarian dress to Oktoberfest, and that the first stop in Munich for many tourists is the Trachten shop.

So we fit right in when we went later that week and met Wendy and her friend Francziska in the Oide Wiesn.

It was the first sunny day after a gray and chilly opening, and people were chatting over beers on picnic tables. Inside the Herzkasperl tent, Lynn wanted the classic sausage and potatoes, but Beth ordered couscous with red beets, something she didn’t expect to see at Oktoberfest.

We joined the dancers for a few songs, then explored the rest of the Oide Wiesn, which included a museum tent with vintage murals and, for kids, a fairy-tale train and carousel. A chain swing that only cost 1 Euro was filled with adults, and it was so popular we had to get a little pushy to get a seat.

Torsten eventually went to Oktoberfest with his office colleagues, at night, and sure enough, he didn’t enjoy the beer-tent cacophony and drinking.

The city seemed to bear all of the visitors gracefully. The locals go, too, usually several times, and it was fun seeing all of the Germans – young, old and even grade-school – roaming Munich in their dirndls and lederhosen.

Some locals do roll their eyes at Oktoberfest. But Beth thinks it’s amazing that Munich can put on the world’s largest folk festival and still keep it authentic and true to local tradition. She’ll definitely be going again next year.