MUNICH, GERMANY — We cruised across the continents in a two-story jumbo jet, for once feeling almost like first-class passengers.

The Thai Airways flight was full, and when we found out we were seated several rows apart, we asked nicely to be seated together and scored exit-row seats next to the window, with unlimited leg room.

There were first-run movies, and warm towels delivered with tongs, and a hot breakfast of eggs, sausage, fresh fruit and croissants with jam. Dawn was breaking as we crossed the Alps, whose tops we could see poking through a blanket of pink clouds.

We got into Munich early, collected our bags and splurged on a taxi, which drove us through the early-morning countryside. The Euros were adding up fast and we hadn’t even hit the city — until suddenly we did. There’s no ugly exurban sprawl in Munich, at least on its north side; score one for Germany.

Soon, the taxi was pulling up to Reisingerstrasse 6 in the Isarvorstadt neighborhood, just south of the historic city center.

Our Airbnb hostess Catiana wasn’t there, but she showed up soon and let us in, leading us up six flights of stairs to a small top-floor apartment that was slightly grubby and more student garret than we would have liked. Luckily, we’re getting a nice discount for staying a month.

The voluble former Floridian, married to a German man and mother of four, put some wine and beer in our fridge and chatted with us for quite a while before leaving us to sleep off some of our jet lag.

We got up a few hours later and went out into the warm, sunny afternoon. We stopped first at a small grocery store two blocks away, where the check-out clerk noticed some of our strawberries were slightly bruised and took 2 Euros off the 3 Euro price.

We picked up hard rolls at the bakery next door, and cold cuts at the butcher shop next to that, where the butcher carefully cut the mortadella paper-thin, just as Torsten likes. The butcher and his assistant were jolly, greeting everyone who came in the door and and wishing them good-bye, just like in Old World shops. Wait, this IS the Old World!

We made sandwiches in the apartment and went back out to the shops around the nearby Sendlinger Tor, where there’s a big underground train hub, stopping at a drugstore to pick up notebooks for Beth and a new fingernail clipper for Torsten.

Then we followed Sendlingerstrasse toward the famous Marienplatz. The wide, pedestrian-only shopping street was packed with people enjoying the springy Saturday evening. At the Vodafone store, a friendly employee gave us a quote for a cell-phone package, and at the Apple Store we picked up an iPhone charger for German outlets. 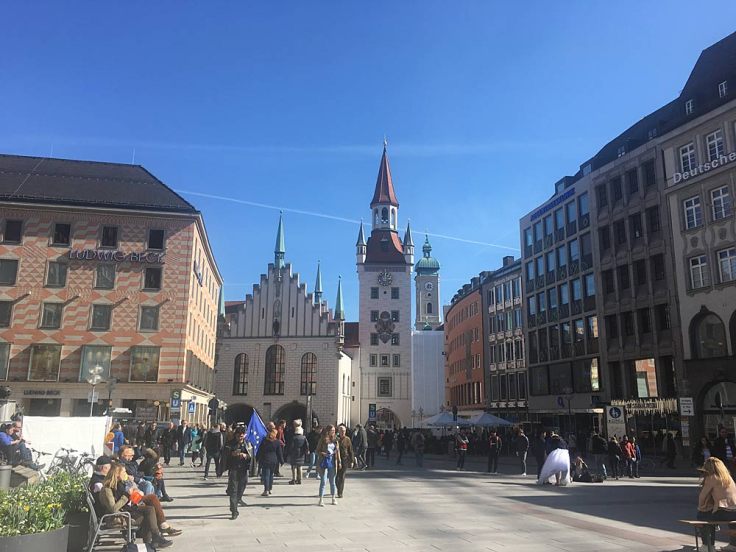 In the theater district at the end of Maximilianstrasse, we saw a Neuhaus shop and went in. As we dithered, trying to decide, the patient clerk offered us each two samples of the famous and expensive chocolates, imported from Belgium every week — that’s never happened to us in the United States! We bought two apiece.

We circled back to our street, and Beth was happy to see the corner flower shop not only was still open but full of Saturday-night dinner guests picking up bouquets to bring to their hosts. Beth bought a single hyacinth bulb in a tiny pot and a stem apiece of white alstroemeria and purple lisianthus, selected by the florist and presented for approval. He was surprised she knew their Latin names, which work just as well in Germany as in the U.S.

We love this unhurried style of shopping, where the shop owner and staff tend to you personally and, if you live in the neighborhood, get to know you by name.

Back at the apartment, Beth put the cut flowers into a tall beer glass and the fragrant hyacinth next to the bed. She stowed clothes in drawers and made some of the owner’s junk disappear into other drawers. With food in the fridge, it was starting to feel like home.

Journey to Munich, Settling in Munich