TE ANAU, NEW ZEALAND — Finally! The weather forecast is great, our boots are tied, packs are packed. Time for our hike on the Kepler Track, one of New Zealand’s nine Great Walks.

Our first day’s destination on this four-day hike, which we reserved in early October, was Moturau hut on Lake Manapouri.

The lake was called Moturau, or “lake with many islands,” by the Maori and played a key role in the birth of the New Zealand conservation movement. When a hydroelectric dam was proposed in 1960 that would flood large swaths of surrounding forest and merge lakes Manapouri and Te Anau, nationwide protests ensued. The dam was built, but water-level fluctuations were limited to what would have occurred naturally.

The hike was delightful: mostly flat, through lush but open beech forest, with moss covering the ground. This part of the track follows the fast-flowing Waiau River, which was one of the rivers used to portray the River Anduin in the Lord of the Rings movies. 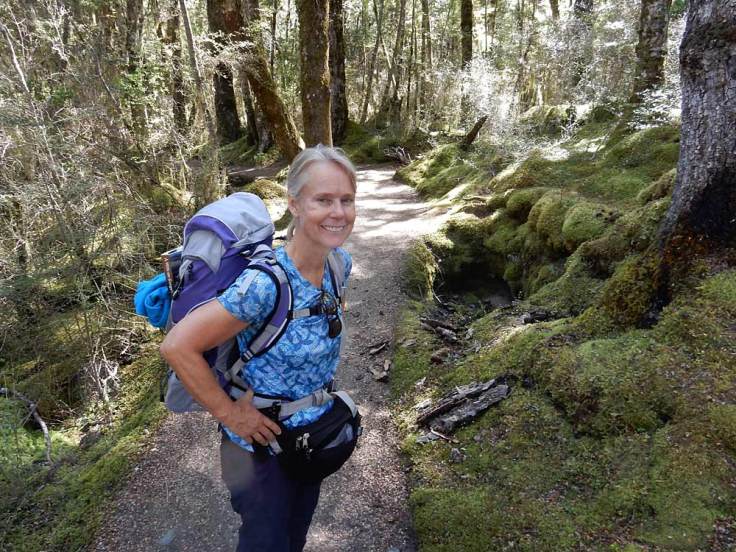 We arrived at the Moturau hut in the early afternoon and, since the two eight-person rooms downstairs  were full, had to pick bunks in the 24-person room upstairs. We would have liked to camp, but because Moturau doesn’t have a camping option, we decided to stay in DOC huts all three nights.

The beach in front of the hut was gorgeous, and we both ran into the cold water for a dip. We would have liked to stretch out on the sand or a driftwood log and gaze at the scenery, but you know who else was there — sandflies. So we retreated to the hut’s porch. 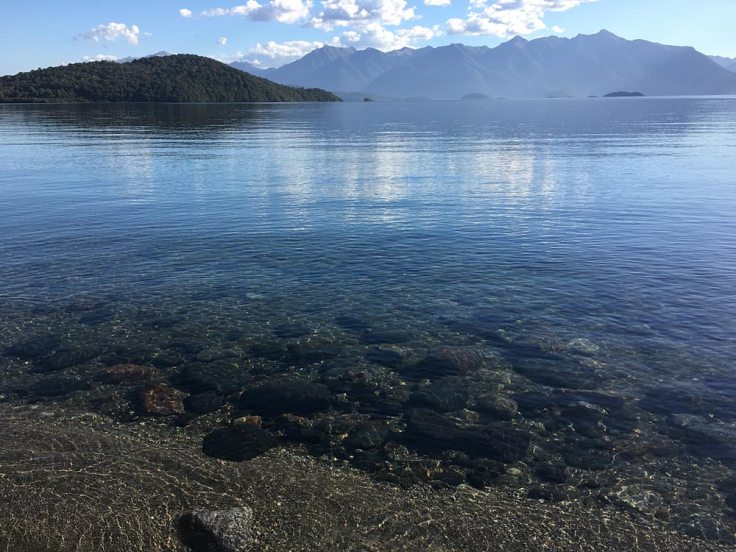 A group of jovial Californians had hiked the Routeburn Track on the same days we would have. We asked how it went, and they said rain had soaked through their pack covers, and tent campers had to pay extra to crowd into the hut, which was full of wet clothes people were trying to dry out. It sounded pretty miserable, compared to our fun Plan B rafting and bike trips. Score!

Shortly before the nightly hut “safety talk,” a straggler came in, and we made friends with her. She was Michelle from San Francisco, on a 7-month solo trip to New Zealand, Australia and southeast Asia. She was getting around by buses and hitchhiking and said she never had to wait more than 10 minutes for a ride.

At the talk, ranger Hedley talked about the history of the area and the local wildlife, which include kiwi, falcons and the New Zealand owl, or ruru, better known under the descriptive name morepork because of its call.

We wish Hedley also would have laid down some guidelines about respecting sleeping campers during the night. But he didn’t.

Just as people were getting ready for bed, we noticed a sign on one of the two bathrooms: “Reserved for ill people.” We hadn’t heard anything, but it was an ominous sign.

The day had been postcard-perfect, with clear skies and warm temperatures. That also meant the sun beat down on the hut’s roof all day, and the already hot room was now packed with 24 hot, sweaty people. The two open windows didn’t provide any relief. 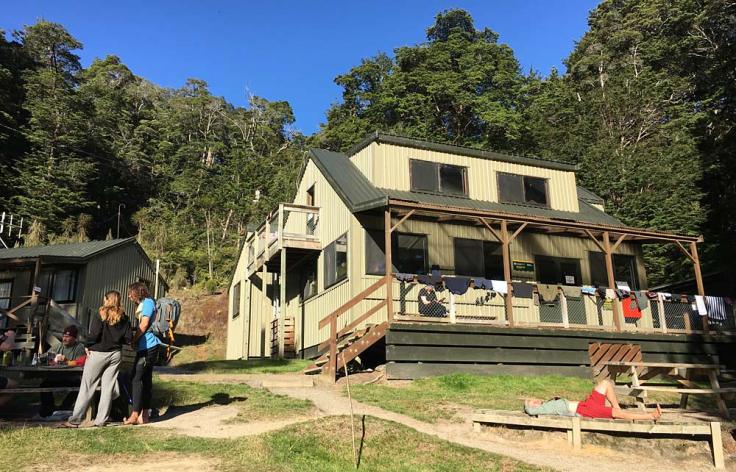 After a long time staring at the ceiling, Torsten decided to go outside. That’s when he met a Kiwi woman who had dragged her mattress out on the porch to try and sleep there.

She told him the ranger had segregated four people with stomach flu into the kitchen to stem the spread. Turns out they were the four people we had sat next to at dinner. Uh-oh.

Now the sign on the bathroom door made sense, but we wish the ranger would have told us what kind of illness the people had, and to be careful with hand washing.

Sleeping upstairs was out of the question, so there was a choice: Join the retching group in the kitchen or join the mosquitoes in the great outdoors. Torsten dragged his mattress and sleeping bag onto a picnic table, slathered his face with bug dope and hoped for the best.

For a while, it went great: The stars were out and he saw the Southern Cross, the Milky Way and several shooting stars. An owl was hooting in the distance, and the skeeters left him alone — mostly. He even thought he heard the neighborhood kiwi.

Some pretty, puffy clouds moved in and the moon rose, but he still wasn’t sleeping, and the mosquitoes became bothersome.

So he went back inside, waking up Beth, who also had a hard time sleeping despite wearing ear plugs. It was one of those nights …

Before dawn, a cell-phone alarm went off. Four Israelis got up and started zipping zippers, and one girl thought it fun to rustle plastic bags and reorganize her pack with a headlight in the packed room for 20 minutes.

After that, all hope for sleep was off, and we got up. Suddenly we realized why people had been sleeping in their bunks the previous afternoon, despite the lovely day. Would all our nights in the huts be like this?

We weren’t in the mood to find out — three consecutive sleepless nights while hiking 10 miles a day in the mountains? No, thank you.

Although Te Anau is packed with people visiting Milford Sound and hiking the Kepler Track, there isn’t much to do in town. So we decided to spend two nights in Invercargill and get a head start on the Catlins coastal drive.

It’s funny how the things Torsten most looked forward to doing in New Zealand were a complete bust.

At the DOC center in Te Anau, he had a testy run-in with a German-born ranger who, when he told her why we were canceling, became very defensive and kept repeating that “the information is all on the website.”

We went online to reserve a room in Invercargill, a Scottish-flavored farming hub near the Pacific and the gateway to Stewart Island. We took the scenic route along the mountain ranges, pulling off at the historic Clifden suspension bridge so Torsten could take a little nap.

It was in the middle of nowhere, but there was a pop-up coffee kiosk, a jet-boat ride on offer and many German campers outside their vans, reading books and cooking dinner. We wondered how all these tourists find their way to these places and have the time to just hang out and do nothing.

We got to Invercargill, settled into a little apartment at the adorable Colonial on Tay motel and were asleep the minute our heads hit the pillows.

2 thoughts on “Hiking the Kepler Track”