Across Cook Strait to the South Island

WELLINGTON, NEW ZEALAND — We had an 8:45 a.m. ferry to catch, and of course we picked the ferry company that was farthest from our place, so walking with all of our gear was out of the question.

Lucky for us, our AirBnb host Mike has a four-day work week, and he insisted on driving us to the Interislander dock in the morning. We didn’t want to impose but were glad for the offer. So at 8 am, we filled up his station wagon and headed out.

The night before, Torsten had received an email from his parents, who had just watched a TV documentary about the Cook Strait called “Strait of Storms.” They were concerned, and sent us well-wishes and hopes for a smooth ride. Although the roads were still wet from rain, the sky looked much friendlier than it had in days.

When we arrived at the terminal, we were surprised by the similarities with air travel: There was a baggage check (without weight limits, luckily), though no metal detectors or security theater. Behind the baggage counter, a sign showed current sea conditions, and we promptly sent a picture of it to Torsten’s parents, 12 hours behind us, so they could go to sleep without worrying.

We checked five pieces of luggage and made our way onto the ferry, which was much like a cruise ship, with six levels of cafes and lounges. Many of our fellow passengers were wearing Guns ‘n Roses T-shirts and seemed tired and hungover; they’d been to a much-ballyhooed concert in Wellington the night before.

We found seats in one lounge right in front of three American 20-somethings who were talking endlessly about muffins, Bloody Marys and other benign stuff.

Torsten marveled at their apparently unencumbered and carefree attitude, considering who we just elected to the presidency. From all of our conversations with non-Americans, it is clear: The world is watching, closely.

Once the ferry started to move, we went outside to see the scenery on both sides of the ship and take in the concert of the various car alarms going off. We passed tree-covered mountains, range lights, windmills and cliffs, and watched the shifting colors of the seawater as we followed the channel out of Wellington Bay.

Once we were in the strait, the wind hit us with full force, and even though it was a calm day in general, the wind pushed us around. It eased once we entered Queen Charlotte Sound, when it seemed as if the entire ship was on the observation deck, jockeying for the best views.

Beth was standing next to an English man who was talking about Americans with an English woman who had lived in New Zealand for 25 years. The man said he’d met a well-educated U.S. engineer at a scientific conference who said he believed in a literal interpretation of the Bible, including that the Earth was only 6,000 years old. He shook his head in disbelief.

Then the English man said he’d had a confrontation at a concert with an American woman who was trying to save an entire row of seats for her friends and called him “ignorant” when he objected. “I told her, ‘Thank you very much, I’ve always wanted to see what a Trump voter looks like,’ ” he said. “And she didn’t deny it.”

It’s been a tough week to be an American.

We were excited to get to the South Island but a little sorry when our “cruise” ended. Picking up our luggage was a challenge. Picture a baggage claim at an airport, but for a capacity crowd of 1,390 passengers. We were stacked three deep, and Torsten had to fight his way to the belt whenever he saw one of our pieces.

After we picked up our car, a newer red Corolla, we stopped in downtown Picton, which has an inviting waterfront park with benches, palm trees and a great view of our ferry.

For lunch, we had pot pies from a bake house, one red curry chicken and one bacon mushroom with gravy, with a chocolate mud cake for dessert. Our next stop was a grocery store, where we stocked up on food and beer.

We noticed that in New Zealand, any alcohol purchase needs to be sanctioned by a supervisor, who is usually summoned by the cashier ringing a bell and raising his or her hand. When cashiers on two adjacent registers raised their hands, Torsten was tempted to join in just for fun, but decided against it.

Then we drove the 30 minutes of winding road to our campground on Momorangi Bay. As usual, Torsten enjoyed this much more than Beth, especially since our new rental handled much better than our North Island bathtub, and the car allowed us to play our own music over the car stereo.

Once at the campground, we found out that we had reserved a camper cabin a few months earlier instead of the tent-camping spot we expected. Okay, then, camper cabin it was. In the United States, something that size would be used for an outhouse. But the cabin was clean, had electricity and was close to the excellent kitchen.

In general, campgrounds in New Zealand are well equipped, featuring community refrigerators, microwaves, freezers, dish washing sinks, clean bathrooms and showers. This one, operated by the DOC, was no different. It even featured three indoor and two outdoor picnic tables.

With some time to kill, we looked for hiking trails, and found a short, 20-minute interpretive trail that led from the campground into the hills and then looped around to the office. All along the trail were interpretive plaques about what we were looking at:

After our short hike into the woods, we went to the beach and found a trail that paralleled the bay and dropped us onto a rocky cove. It was low tide, so we scrambled over rocks, underneath tree branches and along sharp, sloped rocks to the tip of the bay, which still got some direct sunlight.

From our spot, we could see the little settlement of Anakiwa at the end of the sound. Eventually, the sand flies drove us back. That’s when we noticed some of the unique rock we were walking on, which shimmered in all kinds of colors and looked like layer cake. 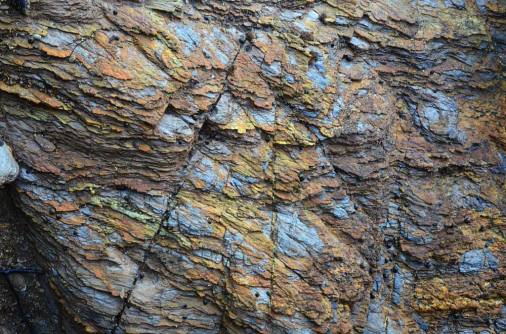 It was a nice evening, so we tried to have dinner outside the camp kitchen, but both tables were taken. When a German couple noticed us looking around, they offered part of their table, and we ate with them: another one-pot meal, this time sautéed beef with rice in an Indian simmer sauce with broccoli.

The Germans, having rented a camper van with full kitchen supplement, were much better equipped and whipped up a risotto with beets.

Our dinner companions were an interesting couple: They had traveled in New Zealand 25 years before and said they’d noticed a lot of changes, most notably the relative scarcity of sheep, as the economy has shifted from lamb production to dairy. We had heard something similar from our AirBnb hosts in Wellington, who said that the increase in cows has led to problems with water quality.

Our cabin (right) in Momorangi campground with our wheels for the next 4 weeks.

For our dessert, we took our store-bought shortbread cookies down to the beach, where we watched boat traffic and kids playing on the swings.