Comedy on the caldera 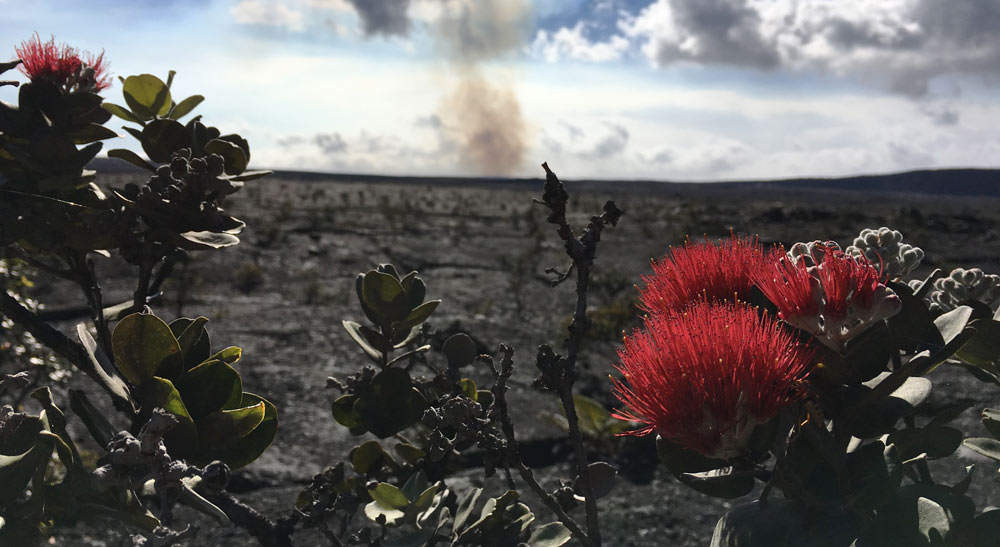 HAWAII VOLCANOES NATIONAL PARK – I think we peaked too soon. We got to hang out with a pod of playful dolphins on the second full day of our trip? Really?

It was hard leaving Ho’okena Beach Park. I didn’t know places like that still existed in Hawaii. There was even a native Hawaiian strumming a guitar at dusk and two sunburned hippie volunteers who patrolled the beach and told me the name of the tree that kept pelting pods at our tent (Philippine almond). And not having a stove meant I had to bum hot water for coffee from our mellow fellow campers, and by the time we left, we had heard their stories and tried them on for size.

Would I, like the retired lady my age from Oregon, want to buy a cheap house on the nearby lava fields, plant fruit trees and hang out at Ho’okena Beach? Yes to the fruit trees, no to the house. After clearing out our Minneapolis house, we are so anti-stuff that we can’t stand the thought of buying anything ever again.

There were plenty of tourists buying cheap crap at the gift shop of Hawaii Volcanoes National Park, our next stop. We lucked out and arrived in time for the once-monthly Into the Caldera program by park ranger Dean Gallagher, who looks exactly like Steve Martin when he grins, scrunching up his eyes and widening his mouth in glee.

All of the tourists  commented on it, and it was a pretty savvy group. As we headed off-trail toward the active volcano, spitting steam into the sky, Ranger Dean warned us about safety. “It’s not as if we don’t trust people, but . . . ” and the whole group shouted, “but you don’t trust people!”

Just two weeks ago, a shelf of brittle, newly cooled lava collapsed right after two tourists grudgingly got off of it, at first ignoring the shouts of rangers. Word is they were still ticked off at the ranger when they left.

Toxic gas is the danger to us, but ranger Dean has a monitor that will beep if concentrations rise. We held our hands to steam vents, snatching them away in surprise, and gingerly touched shards of silica glass thrown off by the plumes of steam. They look exactly like shiny blonde hair – the hair of Pele, the goddess of the volcano.

“I heard a mother telling her son, ‘Ranger Dean wouldn’t let us do it if it weren’t safe,’ ” ranger Dean cackled. “Yes I will!”